Tom has been ‘volunteered’ (by me) to help pick up and deliver some of the car sponsor’s vehicles to the Sheraton.  Unfortunately (!) there’s not enough room for me – not much point in taking a non-driver anyway, so I get to check into hotel adjacent to the Sheraton, and start getting things prepared for our first show – the now traditional Americana preview – ‘Tamworth Presents A Taste of Australia’.  We’ve got a big mob on, so it’ll be a matter of making sure the four sessions – two for early show (6-8pm) and two for late (9-11pm) run to time.

Have alerted everyone to the fact that this is a unique venue.  Not just because it’s the spiritual ‘home’ of Nashville songwriting, but also because the audience is quiet, respectful and have actually come to listen to the songs.  Bit like the old Aussie folk clubs of the 70s and early 80s when conversation was discouraged.  I know it’ll be a bit of a (nice) shock for those who haven’t been before.

Rest of the day’s doing chores and making sure we’re all set to go.  Dropped in to Aristomedia – our publicists, who are doing a mighty job, and to TenTen Music to catch up with old mates Jewel and Barry Coburn who will host a special songwriting session for 10 of the touring party in a week’s time.  They were the original supporters of Keith Urban through MANY years of graft, and have been endlessly supportive of Sounds Australia.  A lot of the writers have organised co-writes while they’re here, but that’s mostly done on a ‘business’ footing with some sort of outcome (a song!) required.  The whole idea of the TenTen session is a much more relaxed meeting with professional writers, where our group can have a general chat about the industry and the way to get songs heard/cut in this fiercely competitive environment.  I’m truly grateful to the Coburn’s for this opportunity.

While wandering back from Music Row, I’m heartened to find out that Nashville now offers a unique opportunity that I thought was only available in Las Vegas (provided you give two hours notice) –

Well, here we are at the other end of the night.  The word I’m searching for I think is triumph!  Erika (Woolham-Nicholls) and Jaime (Scorby), who run the venue, are just wonderful to deal with and have been great supporters.  Yet again, between us all, we’ve delivered two sold-out sessions.  A great way to start! 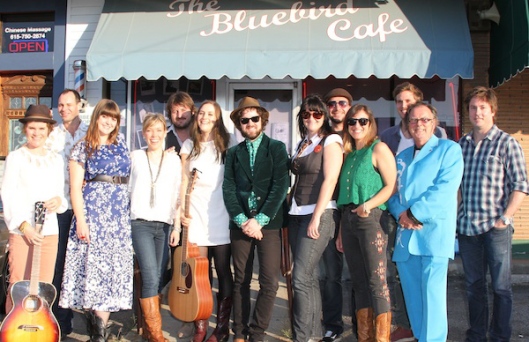 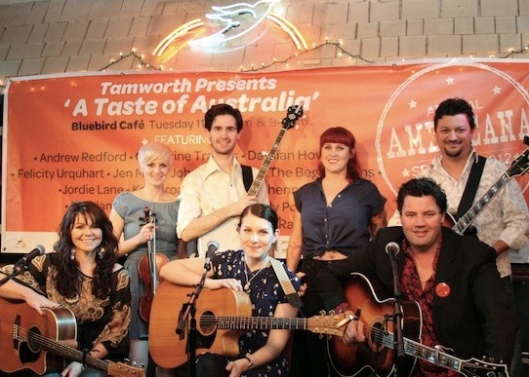 The exciting thing for me is that – coming from far and wide in Australia, I’ve not seen a lot of these folks live before.

In a word – blown away (well, two words), and proud as punch.  The audience reaction was just great, and the performances terrific.  I shouldn’t have been surprised of course, because – from previous years, I know that our performers can stand proudly on the stage where so many legends have stood, and deliver the goods.

There’s prizes from the Tamworth folks, wine from yellow tail (ta!), and I get to present special T-Shirts to Jeff Walker and John Lomax who have been our great, long-time supporters.  The big prize – a ‘Lawson’ from Akubra, is courtesy of great friends David Morgan & Co from Washington who are the national distributors.  I explained – for those who aren’t aware, That Henry Lawson was a sort of dark version of Mark Twain – fair enough I thought.  Tried to channel that ‘vibe’ and ended up giving it to a good looking older chap with a very impressive white beard.  Not only is it a perfect fit, but he turns out to be a writer for ‘No Depression’ one of the great Americana magazine/online outlets.  Now that can’t hurt!  Well done me.  Would like to think the spirit of Henry was guiding me.

So, pack up the banners and boxes and back for a sleep.  Tomorrow they’ll all arrive to register and I’ll need to set up the Sounds Australia booth in the Exhibition Hall.  Time to worry about that in the morning.